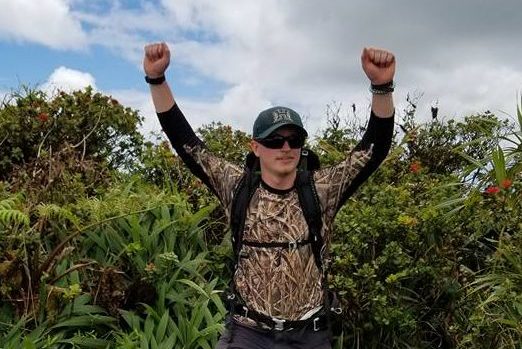 Our member in the spotlight this week is Nathaniel Wehr from the University of Hawaii at Manoa. Nathaniel won the CSIRO best student presentation at SCBO 2018 for his Speed Talk “Worm-farming hypothesis and other soil macroinvertebrate responses to nonnative feral pig (Sus scrofa) removal in tropical montane wet forests” (abstract below). Let’s meet Nathaniel!

What first motivated you to pursue a career in conservation?

I was born and raised in a small coal-mining town in Southeast Ohio, USA where access to the outdoors was easy. I grew up hunting white-tailed deer (Odocoileus virginianus) with my family inspiring my initial interest in wildlife. However, while completing my undergraduate at Oberlin College, I first pursued human and then veterinary medicine unsure of the career I would most like to pursue. Finally, I found my calling to research wildlife professionally while studying the ecology of grey wolves (Canis lupus) at the Audubon Center of the Northwoods in Minnesota, USA. Getting to interact with so many people who had amazing careers in wildlife science inspired me to set my sights on studying wildlife rather than medicine.

Your research focuses on the ecology and management of feral pigs, but takes an unusual angle in looking at impacts underground. For those that missed your presentation, how do you get people interested in and excited about soil microbial communities (not the flashiest of Pacific Island biodiversity!)?

Yes, the critters living underground often get overlooked by the general public and researchers alike. This can make getting people excited about my research a little more difficult. I have generally found that people enjoy hearing about feral pigs themselves either due to their interest in the species as a pest or as a recreational game species. So, I typically draw people in with the allure of feral pigs before wowing them with the unknown world living under their feet.

An ‘invasional meltdown’ sounds terrifying!  What does that mean, and are the Pacific Islands doomed?

At its core, ‘invasional meltdown’ is certainly terrifying for those of us in conservation. Conceptually, invasional meltdown is a hypothesis proposed by Simberloff and Von Holle (1999) that explains the often facilitative relationships that occur between multiple invasive species. In the case of my own research, our results suggest that feral pigs and earthworms, which are both invasive species on many Pacific Islands, actually each contribute changes to the ecosystem facilitating the other species’ ability to thrive. As such, the continued degradation of habitats by earthworms and feral pigs leads to even more damage than you would expect to see if only one of the species was present (i.e. an ‘invasional meltdown’). This does not, however, mean that the Pacific Islands are doomed. Instead, it may be possible to use these relationships to better manage invasive species, such as limiting earthworm populations by removing feral pigs from fragile Pacific Island ecosystems.

You’re also a board member of the SCB Hawaii Chapter. How did you first hear about the Society for Conservation Biology, and what motivated you to get involved with SCBO?

I first heard about the Society for Conservation Biology when SCB Membership and Communications Director, Nathan Spillman, came to my Conservation Biology class looking to recruit board members to create the inaugural board of the SCB Hawaii Chapter. Getting the chance to support conservation locally as part of a larger international organization was immediately attractive to me and spending the last two years on the board has been highly rewarding.

What was your favourite thing about SCBO 2018 in Wellington?
I was most surprised and most enjoyed the diverse array of cultures and countries represented at the conference. The ability of SCBO to being together such a large and diverse group was truly special and is a standard to which I hope to see other conferences aspire.

Finally, what are your plans after you finish your Master’s Degree? What’s your dream job?

Immediately following the completion of my Master’s (December 2018), it is my goal to go on a couple working holidays while staying involved in conservation work. In the meantime, I will be applying to PhD. programs with the goal of studying wildlife ecology, conservation, and management. In the long term, my dream job is to stay in academia as university faculty continuing to teach and research the wildlife inhabiting the world around us.

Nonnative feral pigs (Sus scrofa) are recognized throughout the Pacific Island Region as one of the most destructive, introduced ecosystem engineers present. Comparatively, nonnative soil macroinvertebrates, including earthworms, remain understudied as ecosystem engineers capable of invading and altering both the structure and function of native habitats. Of further importance, the ecological relationships between these nonnative organisms remain largely undescribed. This study analyzed the relationship between nonnative soil macroinvertebrates and nonnative feral pigs using paired sites inside and outside 5 feral pig removal units representing a ~25 year highly constrained chronosequence in tropical montane wet forests in Hawai‘i. Soil macroinvertebrates were sampled across the sites, and abundance and biomass was recorded. In total, we found 13 distinct taxa representing 11 orders of soil macroinvertebrates across all study sites. The removal of feral pigs reduced the abundance and biomass of earthworms, while other soil macroinvertebrate species were largely unaffected by feral pig removal. These results suggest a positive feedback loop (i.e., a facilitative relationship) exists between feral pigs and earthworms, falls in alignment with ‘invasional meltdown’ hypothesis thereby holding important implications for managing nonnative feral pig populations throughout the Pacific Islands.