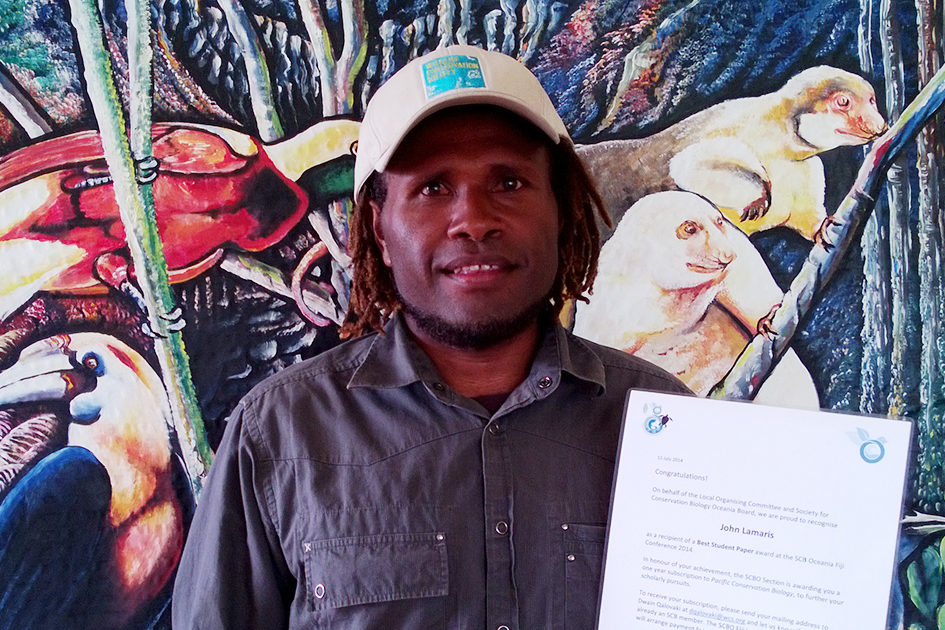 John is a research scientist with the Wildlife Conservation Society Papua New Guinea program. John graduated from the University of Papua New Guinea with a Bachelor’s Degree in Environmental Sciences in 2010. John was awarded the best student presentation award at the SCBO 2014 conference in Fiji, which makes him an excellent candidate for our very first member spotlight!

Before joining WCS, he worked as a Trainee Hydrologist with Lihir Environment Services. His research on the Admiralty Cuscus (Spilocuscus kraemeri) home-range will contribute to the design of a sustainable conservation model for this endemic species, which is a major source of protein for the people of Manus Island.

SCBO: Why did you decide to pursue a career in conservation science and what sparked your interest in the field?

JL: I decided to pursue a career in conservation science after observing the loss of biodiversity from destruction and degradation of the natural environment. Also the loss of traditional knowledge and conservation techniques. Radio telemetry and tracking of wildlife sparked my interest in the field. To be able to understand the secretive life of an animal and designing management strategies for the species is exciting science.

What do you enjoy most about your current role as a research scientist with the WCS?

Venturing out to the most remote and rugged areas of Papua New Guinea doing biodiversity surveys and getting to work with and learn from expert scientists in the field, and working with the local communities.

Many people are familiar with the concept of tambu areas in the marine environment, can you tell us a bit more about how they work in the forest?

Terresterial tambu areas like the marine tambu system have the same long history of use in the Melanesian culture. However, unlike the marine tambu system “no-take” areas, terresterial tambu are specific to particular species. For example, for Siloulou tambu in Manus province of PNG, the restrictions are specifically geared towards hunting of cuscus. This is signified by restriction symbols placed on the tambu markers at the periphery of the designated area: a woven cordyline plant wrap tightly with vines and hung on the markers signifies no capture of cuscus within the area; a noose made of cane strips signifies a restriction to strangling of cuscus in the tambu; sharpen bamboo strips represents a spear and signifies restriction to use of any sharp objects or weapon for hunting in the tambu; cordyline plant planted signifies a social taboo and indicates a restriction agreement. The cordyline plant is guarded by two poles sharpen at the tip representing the spiritual guardians of the tambu planted in a letter “X” formation signifying a “no-take” area. These must be respected and abided by members of the clan and community .A breach of the restriction could result in sickness and death. Additionally, the tambu however does not restrict members of the clan from entering the area to access other everyday needs such as extracting medicinal plants or cutting of trees for building purposes or even making canoes etc.

What do you think are the biggest challenges faced by young conservation scientists in PNG?

I think the biggest challenge for young conservation scientists in PNG is access to information and published studies on PNGs biological diversity.

Where do you see yourself going next? What’s your dream job?

In the short term, I would like to continue the study of the Admiralty cuscus and sustainable use of terrestrial tambu systems and then pursue a master’s program if an opportunity arises.

If you know of someone we should feature in our Member Spotlight, please get in touch!