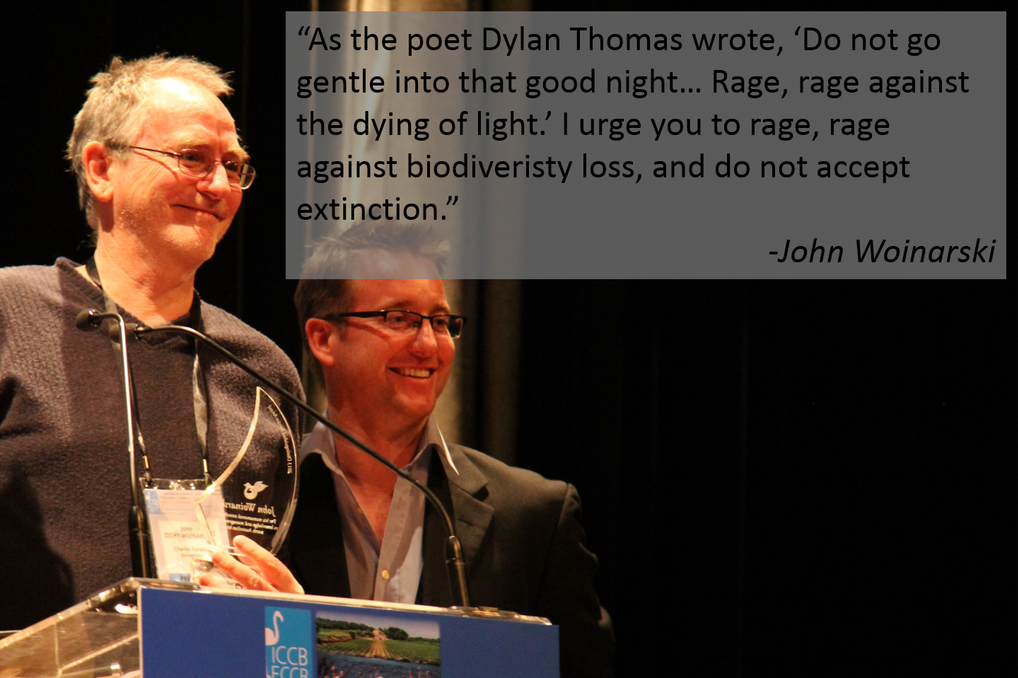 When the Society for Conservation Biology Service Awards were announced at ICCB 2015 three of the six awardees on stage were from Oceania!

Early Career Conservationist Award: Stacy Jupiter
Honors the achievements in conservation by professionals early in their careers (no more than 10 years since leaving school)

Stacy Jupiter is the Melanesia Program Director for the Wildlife Conservation Society, based out of Suva, Fiji, where she previously directed WCS’s Fiji Country Program. Stacy’s work in Oceania focuses on understanding the impacts of human activities on linked tropical coastal ecosystems and ecosystem services, and the effectiveness of local management in achieving conservation, livelihood and well-being outcomes. In working with local communities and governments, Stacy deeply recognizes the importance of incorporating local knowledge and traditional practice and beliefs into management planning.

“It is a great honour to be recognized for my work in Oceania, but in truth I have mostly just been a conduit delivering information to local communities and governments faced with tough decisions about managing a myriad of threats affecting their biodiversity and livelihoods. It has been a privilege to interact with these decision- makers across the Pacific who are the true champions of biodiversity and stewards of the Earth’s resources.”

In her acceptance speech, Stacy reflected on the bumpy road to a career in conservation. You can read her blog post on the same here!

For more than 30 years, Sue Miller Taei has lived and worked in the South Pacific region, where she’s designed and led regional and site conservation initiatives for cetaceans, dugongs, turtles, invasive species, birds, large and small scale protected areas. In addition, Sue worked with Pacific Island states notably as a lead technical adviser for the region’s first large scale marine protected area – the 400,000 sq km Phoenix Islands Protected Area in Kiribati. Since 2005, Sue has led the development of Conservation International’s Pacific Islands Marine programme and is currently the executive director of the New Zealand and Pacific Islands and Ocean Programme based at the University of Auckland.

“Protected areas are long-term projects between people, place and partners,”

Distinguished Service Award: John Woinarski
Recognizes individuals, groups or institutions for distinguished service in any field associated with conservation biology and whose work has furthered the mission of SCB

John Woinarski heads the Biodiversity Conservation division of Australia’s Northern Territory Government environment department. He was given the award for his monumental contributions to knowledge and management of the north Australian biota. Most recently his work was instrumental in revealing the catastrophic decline in north Australian mammals and implementing strategies to reverse it.

One thought on “More awards for SCB Oceania members”